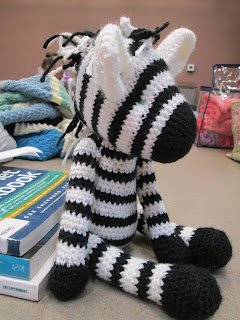 My niece, Alyssa, and her husband, Jack, are expecting their first child, a son, this month.  Alyssa loves zebras and I found a crochet pattern on Ravelry by spire.  I crocheted this zebra for Jack Jr.   I also crocheted a Pemberley Heirloom baby blanket for him. 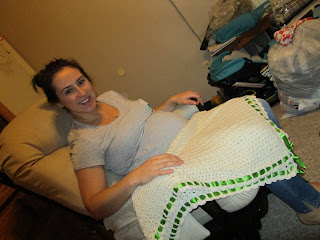 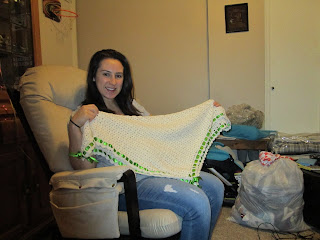 Blogger would not let me publish from my PC due to some error, so I am attempting to revive this sadly neglected blog via iPad using the blogger app. I hope to participate in the Crazy Quilt Journal Project 2013 and would like to blog my progress. I would like to make a Pansies for Remembrance crazy quilt as a tribute, to my beloved 95 year old mother-in-law, Grace, who has Alzheimer's Disease. Wish me luck! 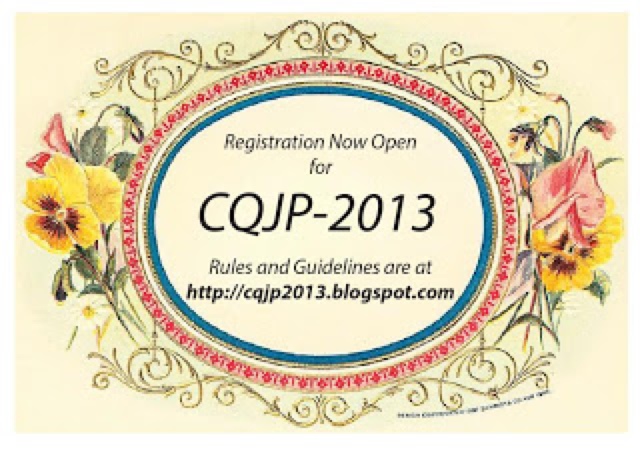 As Christmas approaches, I am counting my blessings and thanking God for them; while praying for friends facing illness or adversity, as well as for the safety of our troops. Missing my departed loved ones, Milissa-our beloved sisterbelle, who was taken much too young; and my dearly loved parents, who had long, full lives. Trying to remember our happy times together. Missing my big brother in FL, and Aunts out west. Feeling happy that I had gifts to wrap for family and friends, praying for those less fortunate. Grateful for the greetings and gifts I have received, but most of all for the friendships that enrich my life. Remembering that the most important things aren't things... May God Bless you with a Merry Christmas and a Happy, Healthy, prosperous New Year!
Posted by Marianne S-M at 10:39 PM 1 comment:

Twenty-six years of happily ever after. . .

Twenty-six years ago today, my beloved late Dad walked me down the aisle, and I married the man of my dreams.. Today he brought me a beautiful floral white gift bag filled with a lovely card, a romantic Regency novel about a wedding, by an author I'd yet to read; and a gift certificate to my favorite place to shop, Scrappers Cove. He had also tried to find a dozen artificial roses as I am recovering from a nasty bout of pneumonia that had waylaid me for most of November, and I had requested no flowers due to my asthma, which the pneumonia exacerbated. I was so moved by his sweet presents, perfect for me. I am so blessed to have married my knight in shining armor, I made him a card with a die cut I assembled of a knight in armor. He liked it so much, he took it to his office to display! I also gave him Microsoft Office 2010 and my promise to help him compose newsletters for his nonprofit organization.
Posted by Marianne S-M at 10:17 PM 1 comment: 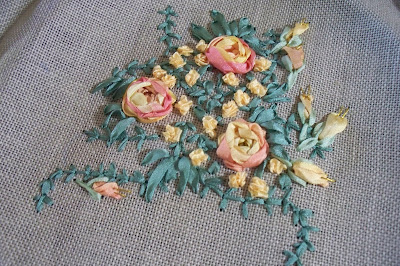 This is my incomplete attempt at Sharon Boggon's Silk Ribbon Embroidery Lesson Two. I have yet to finish rosebuds as I ran out of the ribbon, and still need antique gold seed beads which were out of stock.
Posted by Marianne S-M at 7:14 PM 1 comment:

SRE Lesson One with Sharon Boggon 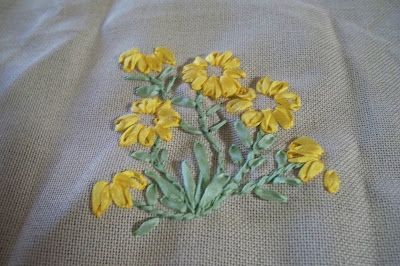 This is my attempt at Sharon Boggon's Silk Ribbon Embroidery Lesson One through joggles.com I have yet to bead the centers or re-iron the linen. Stitches include stem stitch, ribbon stitch, and lazy daisy.

Thursday, I went to Pennington Quilt Works, and had a fabulous time buying fabric and patterns and meeting such nice women. I drove there on the highways using GPS and came home on county roads using just the sense of direction my Dad had nurtured in me. I didn't get lost and saw fabulous farms, horses, cows, gardens and a Chinese geese for sale sign. The homes were lovely to look at and so much greenery, it was very refreshing.

I had surgery this past Monday on my breast and will get my biopsy results on Monday. It should be good news, as it is 90% likely to be benign. I also found out that I don't have VonWillebrand's Disease which I had been diagnosed with at age 17. I do have an Alpha 2 Antiplasmin Deficiency, a very rare bleeding disorder. As of 2009, there were 15 reported congenital cases worldwide. My good friend Lesley in England, said leave it to me to a "posh bleeding disorder", lol. My brother and sister surprised me by offering help for the surgery, my late Mom would be very happy. ;-}
Posted by Marianne S-M at 10:25 AM 1 comment: 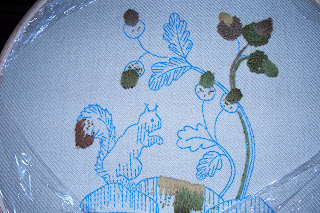 Yesterday I attended a crewel workshop by the world renowned Phillipa Turnbull of Cumbria in the UK. It was held at the Perkins Center for the Arts in Moorestown, NJ, which is in an old Tudor mansion that was charming. See http://www.crewelwork.com/ if you are not familiar with her work. She is the opening speaker and a teacher at EGA National Seminar in San Francisco. I highly recommend taking her classes if you have the opportunity to do so.The workshop I attended was organized by Karen of www.NimbleNeedle.net, to whom I am most grateful for this wonderful opportunity. Karen's store is around the corner and she is delightful. She recently taught a canvaswork piece, with 5 stitches which were new to me, to my local EGA chapter.
It was fabulous. I learned long and short shading (which I had always been afraid to try)and an entirely new way to do French knots. (Which really improved my consistency!) When looking at my first ever attempts at long and short soft shading, she said my stitching was "bloomin' beautiful". I also learned stem stitch properly; and laid and couched work, as well as closed fly stitch. Also a fascinating lecture the day before on the history of English and Scottish crewel and textiles. It included a power point presentation with amazing photos and she brought a historic American crewel piece which was amazing.

She was commissioned to recreate the Queen Mother's silk damask bedspread lost during the war that matched a crewel headboard, both of which had been originally embroidered by the Queen Mum's mother. It is at Glamis Castle. (This was featured in Inspirations - the Australian embroidery magazine and it is stunning.)
It is also featured on her DVD which I bought, as well as her seat frame (which I found surprisingly comfortable and easy to use even though I am quite obese)
I had brought my heavy metal K's creations stand to the workshop, did not use it because I really liked the seat frame. I also couldn't resist her heartsease pansy kit as this is my favorite flower. I am working on her secret squirrel piece, most of the attendees did her deer stag piece, but I love squirrels, and wanted a beginner piece.

Her beau, Harry Williamson is a trustee of the Royal School of Needlework and a Liveryman of the Worshipful Company of Broderers. He spoke yesterday on the history of them both. His lecture was very interesting and quite informative. He is quite charming and Phillipa is just a treasure. The amount of individual attention was unbelievable. Absolutely amazing 2 days!!! Worth every penny. She has some amazing stuff on her website including stitch demos.

I am really looking forward to An Adventure In Crazy Quilting in April 2011, in Connecticut
and taking classes from Sharon Boggon, Allison Aller and Betty Pillsbury. The workshop I just attended has really improved my stitching skills and Phillipa's comments has vastly increased my self-confidence. Check out www.maureensvintageacquisitions.blogspot.com
Posted by Marianne S-M at 2:48 PM 3 comments: